If you are a regular visitor to Boultham Park you will know John Pye, he has been creating the feature around a new tilting weir outflow. This could have been a bland concrete addition lakeside but John is improving the infrastructure and in a double edged swoop creating an attraction that enhances the park. Due to his style of using reclaimed bricks you could easily be fooled that the ‘gully’ as he calls it, has been on the park since the Boultham Hall was built. It complements the Beacon also made by John in his back garden, while providing fresh character to that area. John has made this possible all in his own time, as a volunteer, fantastic.

What I really love is that as well as his sound creative ability, John always has time for passers-by to say good morning, give them information about his work or about the park, cheerfully. This is absolutely priceless and the vital ingredient for giving the park a warm and welcome feeling. How many of us give that time to others in our daily grind? We urge you to go and see him while he is still there to taste the flavor of his efforts and perhaps that will inspire you to give back to Boultham Park. Even if it is only by saying hello to passers-by on your daily walk about. His example and effort will in that way be rewarded tenfold. John you are a true Boultham Park Ambassador, the park salutes you.

Many thanks go to Kier Group for donations of materials. Lincoln City Council for its support and input. Gusto Construction and Casey Group for support. Thank you to all others supporters unnamed. 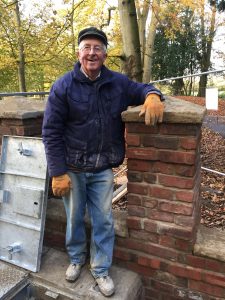 Up and Up For Boultham Park in 2017
Scroll to top